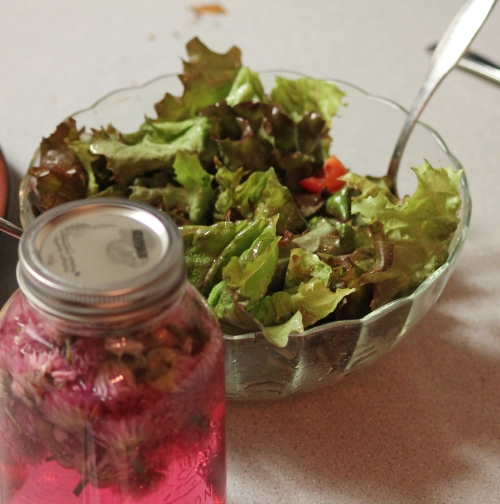 The garden is humming with all sorts of insects and creatures. I have planted to attract butterflies and bees and its working. All day you can see and hear them feeding and gathering.  They love the Delphinium, and I love to watch them go in and back out until they are loaded with pollen.

The pond attracts creatures as well especially since it has been so hot. We had 30 days of sunshine in July, and the temperature has reached 30 degrees C. most days.

It cools down considerably in the evening and our friends the bats come out in droves to feed on mosquitoes and other small bugs. We built houses for them last year, and we have quite a clan now.

Imagine my surprise to wake up this morning to find one of our friends came for a sleepover. He was hanging from our bedroom door. I didn’t want to wake him after such a hard night’s work.

Irony in the Garden

Conversation on a Friday at work.

Q. What are you doing this weekend?

A. We are going hiking in the hills to pick Burdock, it’s a healing medicine.

Q. What are you doing?

A. Working in my garden, trying to kill Burdock.

Burdock is a medicinal herb, native to Europe and Northern Asia, but also grows in the United States. It is a relative of the Feverfew, Dandelion, and many other biennial thistles in the daisy family. It’s main healing properties are found in the root.  It can purify the skin, remove blood toxins, eliminate fungi, prevent infections and is antibacterial. It can be used in detoxing.

I am trying to get rid of for its most interesting benefit. It was the inspiration for Velcro. After taking his dog for a walk one day in the early 1940s, George de Mestral, a Swiss inventor, became curious about the seeds of the burdock plant that had attached themselves to his clothes and to the dog’s fur. The result of his studies was Velcro.

I am a natural gardener. Killing it means pouring salt on it. It took about 10 lbs. of salt. I have a lot of Burdock.