All Will Be Well

I took this picture of the full moon last night. To me, it looked like the eye of creator watching over us through the dark storm clouds. It felt peaceful. Thanks to Gratefulness for the quote.

It is difficult to be a pilgrim today. It just seems hopeless. We are blessed this year to have the Feast Day of the Annunciation and Good Friday on the same day. We can celebrate the light coming and the light  extinguished.  Today, the day in between, the space for waiting and contemplating;  we look forward to renewal.  Let us lighten our souls tonight as beacons of hope. 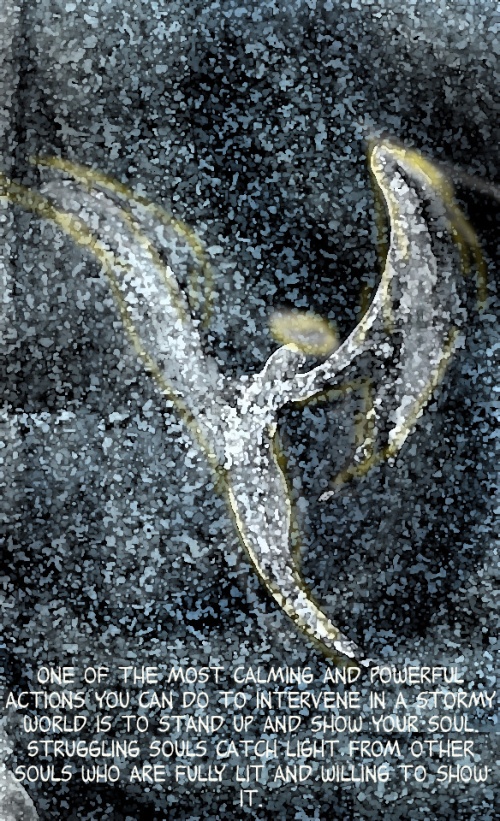 “One of the most calming and powerful actions you can do to intervene in a stormy world is to stand up and show your soul. Struggling souls catch light from other souls who are fully lit and willing to show it.” 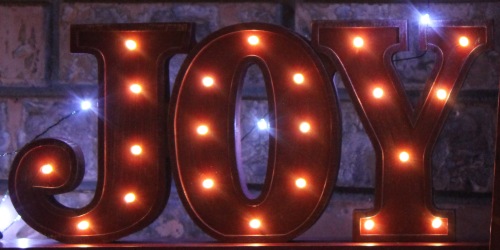 ‘What we have to do is find the places of hope’

And sometimes we have to wait for them. In our fast paced world, in anguish,  we try to control everything. We want it to be right for us now. Through many trials and tribulations of being knocked on my can or having the “cosmic baseball bat” whack me on the side of the head. I know that God (creator) has three answers when asked, yes, no, and not yet. And what we have to do is wait.

My heart broke open this week to learn that my daughter’s dear friend will be fighting for her life. How I hate that phrase; fighting! It always denotes a winner and a loser. Her cancer has returned. This is not a battle of win or lose. It is about acceptance, waiting and finding the spaces in between of hope. The Christmas carol, God Rest Ye Merry Gentlemen, talks about the comfort and joy that our Christmas season brings. We need both.

With all these words, reflecting the seasons wishes, for my daughter, friends and family; they all sit firmly on the bottom word. FAITH.

We can do this, and wait in the spaces of hope…. 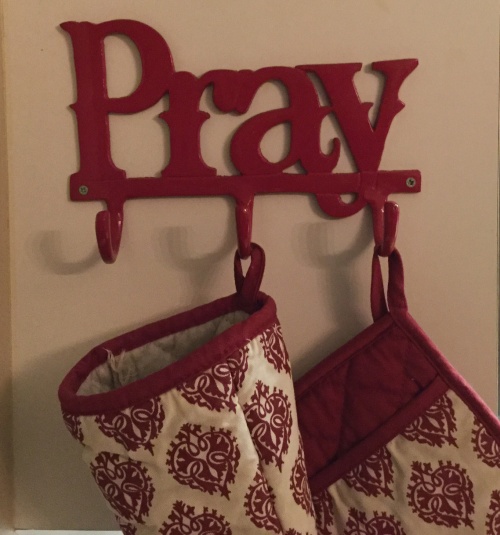 It sounds like a very bad Miss America joke. “my greatest wish is for world peace”. Why would I have said that?
My daughter writes a very interesting blog. http://martinistyle.wordpress.com/2014/03/13/making-peace/ Not one for social media or putting herself and her family out there; she was inspired at an education conference. She writes every night now. I always like to stay up and read her blog before I go to bed. It usually gives me a warm feeling. This post gave me lots to think about.

I really had to stop and think why I would have said that my greatest wish was for “world peace”. So pie in the sky. Was I just being facetious? Was I just saying anything to placate her? Did I really think that is what I was wishing for? Or did I just want peace and quiet from her constant questioning?

I have taken a few days to really ponder it. Is my wish today for world peace?

I think every parent, in their heart wants to keep their children safe. They want them to grow up without conflict in the world, without fear of war, hunger, scarcity, even death. They want more for their children than they had themselves. I wanted to save them from my suffering and fears; the death of my friend at 10. Killed along with her whole family by the hands of her father. The long-suffering of my dad who died from bleeding ulcers. Something  cured today by antibiotics. He got very sick when I was eight and died my first year of university. Right after that my niece died from pneumonia at age 13. We were only five years apart and very close. This smack down with suffering started me on my own personal journey for answers.

Not growing up with a familial spirituality I was constantly searching. Growing up in the 60’s and 70’s there were many new and emerging ideas and thoughts. At 17 I learned about transcendental mediation, Zen and Tibetan Buddhism. I was the consummate “hippie chick” Protesting the war in Vietnam was the norm, even for Canadians. World peace was a mantra. Leonard Cohen and Joni Mitchell were my constant companions.

Yet time passes and decisions get made. I became a wife and mother and then a single mother. Responsibility for another life was mine. Somehow the success on my child became my success. Somewhat narcissistic I would say. I didn’t want world peace, I wanted them not to have to experience suffering, dying or death. I already knew that everything was not okay. Bad things did happen to good people.

In my journey to keep them safe I encountered many wonderful mentors and teachers. My own mother and our new sisterhood as mothers, not daughter and mother was enlightening. My desire to give my children a spiritual foundation led me to St. Francis of Assisi, the Poor Clares and Father Tim Elliot, OFM of Papua New Guinea and his lifelong ministry to the lepers there, to people who through their actions really did work for world peace.

Did I keep my children safe? Did I save them from heartbreak, hard lessons learned, growing up and older, suffering? No. That’s not the way it works.

What I have learned is that I could only set them on the path. Planes disappear, wars start, friends die, life is suffering and despair but through it we can know happiness and that their pain and suffering and along with that, their happiness is the result of their own actions and not my dreams for them. Just as I used to “now I lay me, down to sleep” prayer every night as a child with a “god bless” for everyone I knew, I now pray every night, the prayer of  loving kindness. May they and all be free from suffering and the cause of suffering.

Did I give them what they needed to wish for world peace and the ability to work for it? I can’t, nor ever could stand between them and heartache.

They will find peace for themselves.

Posted in Thoughts, What Matters